Barely 6 weeks into my Lotus ownership, and membership with LCQ, I responded to a request on the LCQ Facebook page for Lotus owners. The request came from an event organiser at Amberley Airforce Base. The event he was organizing was a private event for Airforce families, called Wings and Wheels, a combined Air and Car Show! It sounded like a great opportunity to me.

This event has been running for many years, and in its early days, it was only Defense force personnel with special or interesting cars that provided the Car Show component. However as this event has evolved, the opportunity for non military participants, such as myself, has arisen. Something my family and I are very grateful for, because we had a wonderful day.

The organisation took many weeks and even though the dedicated Airshow was ultimately cancelled for logistical reasons, we were still treated to take-off and landings by two A330 MRTT/KC30A’s and four F/A-18F Super Hornet fighter jets. Two of the F/A-18F Super Hornet’s completed some low tight turns above the car show area, much to all attendees delight! There were quite a few faces displaying complete shock and awe as they heard and felt the incredible noise that these impressive machines make for the first time!

The car show component was incredibly diverse, there were super cars, like the 488 Pista, the 458 Specialè and three other Ferraris. There were two McLarens, a Ford GT40, a Lamborghini, a Bentley, a Rolls Royce Cullinan, some older 911s and the list goes on! There were movie cars including the Batmobile, the Monkees Car, the General Lee Dodge Charger from the Dukes of Hazard, Herbie, the two-door Ford Gran Torino from Starsky and Hutch and many more. There were drag cars and EVs, race cars and vintage cars, too many to mention, suffice to say, there was something for everyone!

The day was a ‘Great Opportunity‘ to meet people and enjoy a pretty incredible private car show and military aircraft display, whilst raising money for Legacy. All of which would never have come into my life, without the ownership of my Lotus Elise Sport 220 and membership with LCQ. 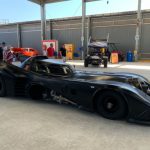 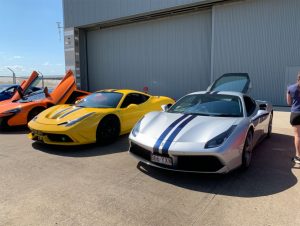